Staging the State: The Politics of Opera and its Architecture in Early Republican Turkey 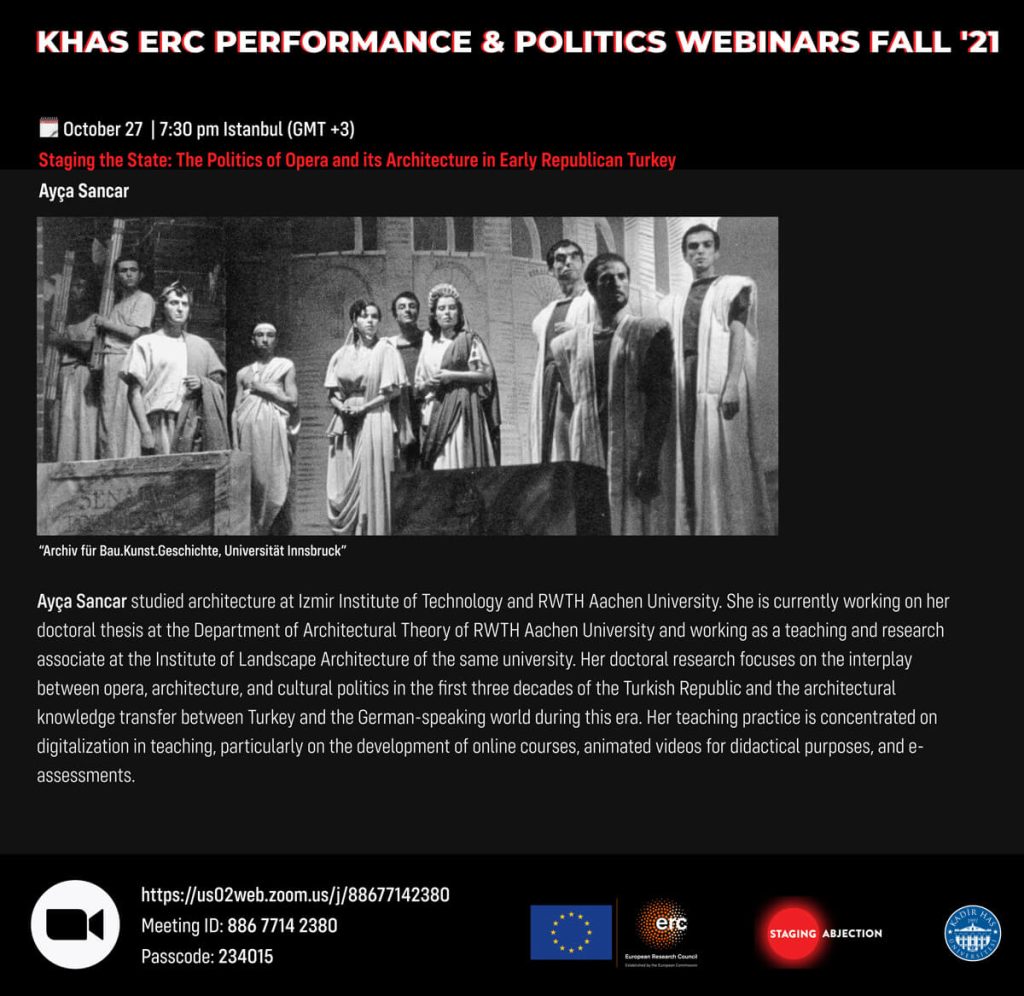 The webinar will be in English.

The presentation will discuss the interplay between opera, architecture, and cultural politics in early republican Turkey, using opera and its architecture as a lens to examine politico-cultural transformations. It will investigate analogies between opera performances and the architecture of the buildings in which these performances took place, discussing the underlying politico-cultural aspirations. Addressing contemporary developments, the paper will also draw a bow between past and present approaches. Ayça Sancar studied architecture at Izmir Institute of Technology and RWTH Aachen University. She is currently working on her doctoral thesis at the Department of Architectural Theory of RWTH Aachen University and working as a teaching and research associate at the Institute of Landscape Architecture of the same university. Her doctoral research focuses on the interplay between opera, architecture, and cultural politics in the first three decades of the Turkish Republic and the architectural knowledge transfer between Turkey and the German-speaking world during this era. Her teaching practice is concentrated on digitalization in teaching, particularly on the development of online courses, animated videos for didactical purposes, and e-assessments.

Please register in advance for this webinar:
https://us02web.zoom.us/webinar/register/WN_WV1ioIB8TPuC-Lhp2g_8yg

With the reconversion of Hagia Sophia from a museum to a mosque in July 2020, the field of politicized meanings surrounding the building and its history shifted yet again. Recent debates over Hagia Sophia’s status have pivoted on the dichotomy of the museum and the mosque as a clear expression of the ideological antinomy between secularism and Islamism in Turkey. In his presentation, Dr. Jeremy F. Walton pluralizes and complicates such dichotomies without ignoring the performative power of Neo-Ottomanism in relation to Hagia Sophia more generally.

By drawing on Susan Stewart’s (1992 [1984]) trenchant analysis of the gigantic, the miniature, the souvenir, and the collection, he delineates the multiple semiotic modalities that Hagia Sophia inhabits, and might inhabit. To begin, he conceptualizes the reconversion of Hagia Sophia into Aya Sofya-i Kabir Mosque as a performance of gigantism and monumentalism in Stewart’s sense, in tandem with the broader monumental infrastructural politics of the AKP. He then examines the miniatures of Hagia Sophia located in two theme parks, Istanbul’s Miniaturk and Beijing’s The World. In this context, Dr. Walton focuses especially on the distinct collections of miniatures assembled by the two theme parks and Hagia Sophia’s place within each of these assemblages. Finally, he concludes with a speculative contrast between two souvenirs of Hagia Sophia: a coin that commemorates its recent reconversion, and an antique photo album that potentially enunciates other, subaltern pasts. Dr. Jeremy F. Walton is a cultural anthropologist whose research resides at the intersection of memory studies, urban studies, the comparative study of empires and imperialism, and critical perspectives on materiality. He leads the Max Planck Research Group, “Empires of Memory: The Cultural Politics of Historicity in Former Habsburg and Ottoman Cities,” at the Max Planck Institute for the Study of Religious and Ethnic Diversity. Dr. Walton received his Ph.D. in Anthropology from the University of Chicago in 2009. His first book, Muslim Civil Society and the Politics of Religious Freedom in Turkey (Oxford University Press, 2017), is an ethnography of Muslim NGOs, state institutions, and secularism in contemporary Turkey.

He has previously held fellowships at the University of Rijeka, Georg August University of Göttingen, Georgetown University, and New York University. Dr. Walton has published his research in a broad selection of scholarly journals, including American Ethnologist, Sociology of Islam, Die Welt Des Islams and History and Anthropology. He is also the co-editor of several volumes, including Anthropology and Global Counterinsurgency (University of Chicago Press, 2010) and Art and Politics in the Modern Period (University of Zagreb Faculty of Humanities and Social Sciences, 2019). “Empires of Memory,” which Dr. Walton designed, is an interdisciplinary, multi-sited project on post-imperial memory in post-Habsburg and post-Ottoman realms. In early 2022, he will inaugurate a new research group, “REVENANT—Revivals of Empire: Nostalgia, Amnesia, Tribulation” at the University of Rijeka (Croatia), with support from a European Research Council Consolidator Grant
(#101002908).

The webinar will be in ​English.

Working Out Desire: Women, Sport, and Self-Making in Istanbul 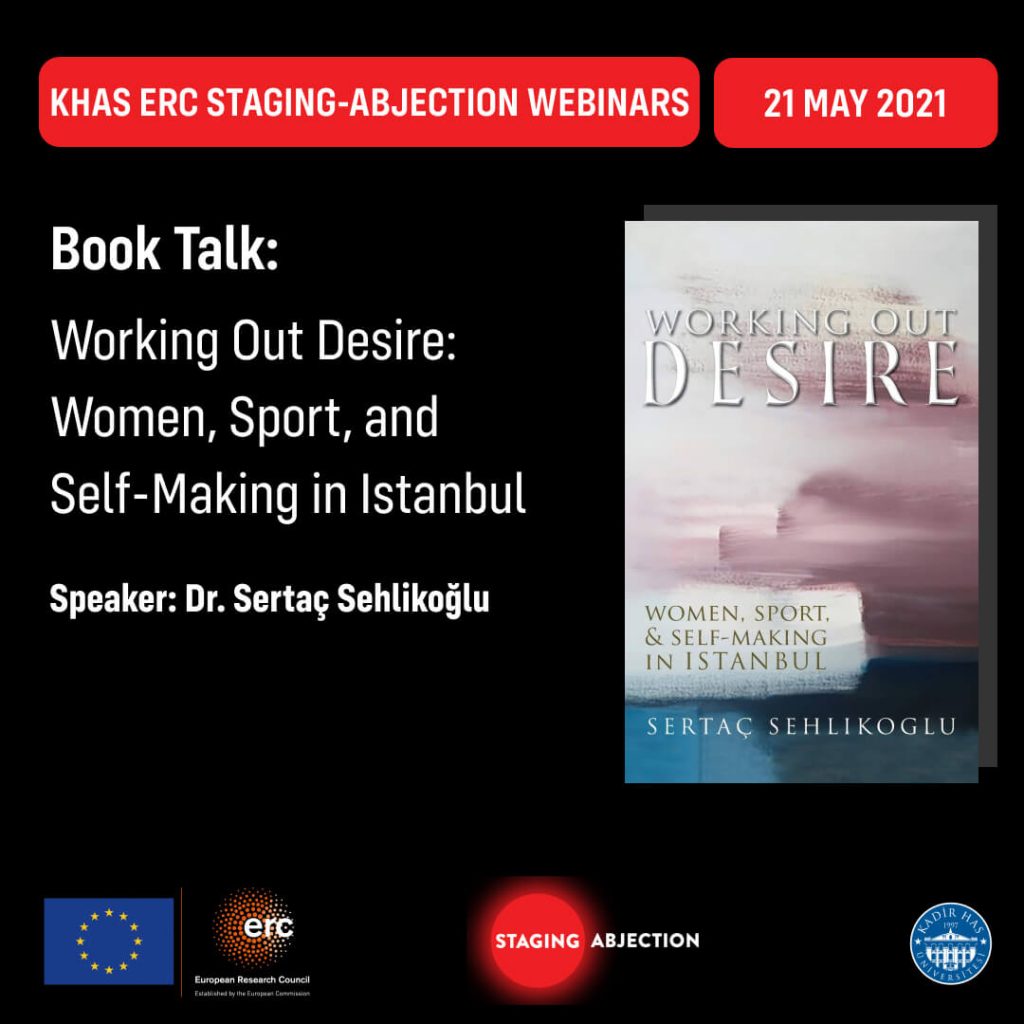 Please register in advance for this meeting:

In this webinar, Dr. Sehlikoğlu will be discussing her recent book Working out Desire: Women, Sport, and Self-Making in Istanbul. The book traces Istanbulite women’s enthusiasm for exercise, or as they call it, spor merakı (interest in/curiosity about sports), which was pursued by one and a half million women during the years she conducted her field research. Sehlikoğlu explores this seemingly mundane activity as an interest in establishing a new self—one that attempts to escape from conventional feminine duties—and an investment in forming a more agentive and desiring self. Working Out Desire develops a multilayered analysis of how women use spor merakı to take themselves out of the domestic zone physically, emotionally, and also imaginatively and connects them to a global movement.

Working out Desire presents the ways in which women’s changing habits, leisure, and self-formation in the Muslim world and the Middle East are connected to their agentive capacities to shift and transform their conditions and socio-cultural capabilities.

Dr. Sertaç Sehlikoğlu is a social anthropologist specialised in gender and subjectivity in the Middle East and Islamicate contexts. Her work often focuses on intangible aspects of human subjectivity that enable humans to change and transform social life. She has studied in Istanbul, Montreal, Toronto, and Cambridge before completing a research fellowship at Pembroke College, Cambridge.  Dr. Sehlikoğlu is the editor of the book, The Everyday Makings of Heteronormativity: Cross-Cultural Explorations of Sex, Gender, and Sexuality; the editor of three special issues, Everyday Intimacies of the Middle East, Why Revisit Intimacy?, and Fieldsights – Field Notes on Sports; and the author of two books, Kişilik Özelliklerine Göre Çocuk Eğitimi (Education and Children’s Personality Trait) and Working Out Desire: Women, Sport, and Self-Making in Istanbul as well as several articles. She is currently leading an ERC project titled “Imaginative Landscapes of Islamist Politics Across the Balkan-to-Bengal Complex, TAKHAYYUL” on imagination and politics as Senior Research Associate at the Institute of Global Prosperity at the University College London:
https://www.ucl.ac.uk/bartlett/igp/dr-sertac-sehlikoglu

The talk will be in ​English. 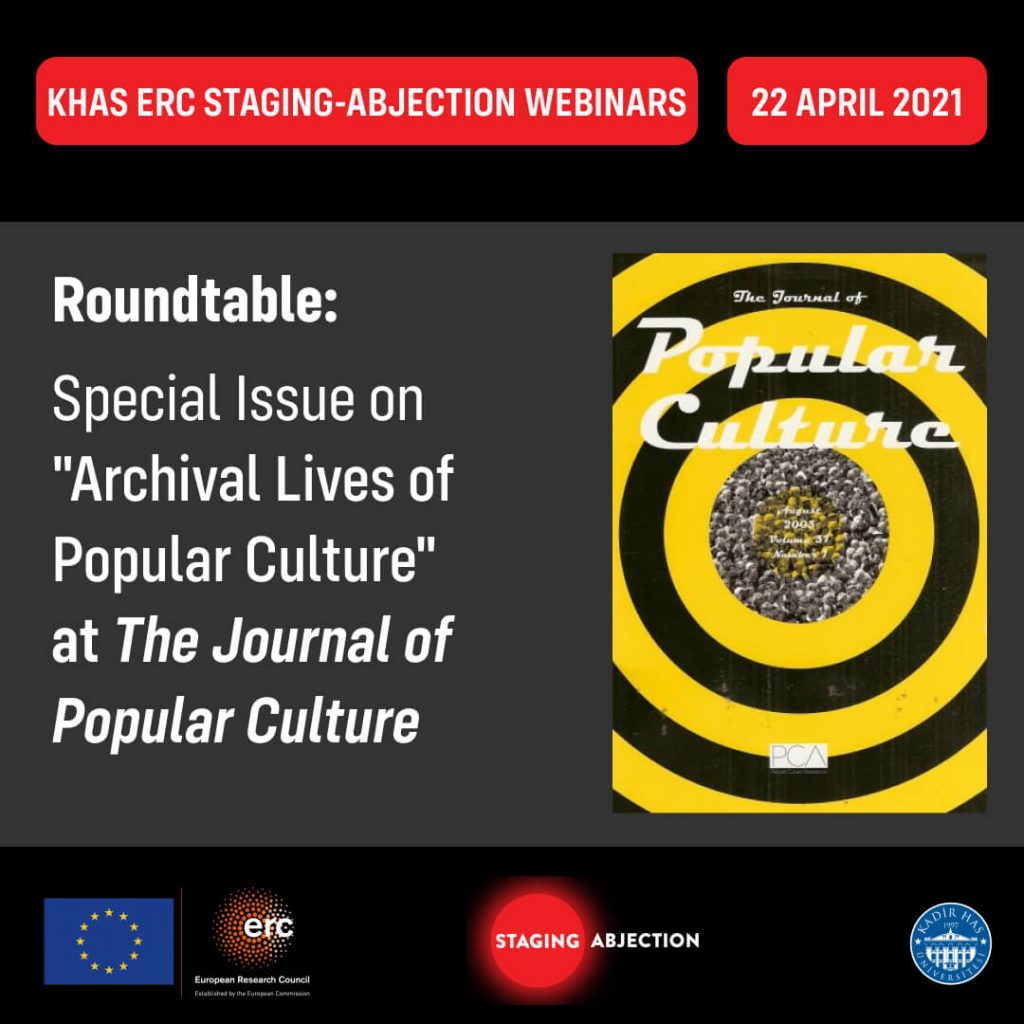 The latest issue of The Journal of Popular Culture, guest edited by Rüstem Ertuğ Altınay and Olivera Jokić, examines the complex relationship between archives and popular culture in the context of the “archival turn.” Bringing together a group of essays by scholars and practitioners, diverse in their geo-graphical focus and objects of interest, the special issue explores how studying popular culture materials can fundamentally advance our conceptions of the archive and how using the archive as a lens can enrich the study of popular culture. The essays reveal how the relationship of mutual and revitalizing pressure between archives and popular culture can produce critical knowledge about the desires that shape our social and political imagination of the future.

At the roundtable, the authors and the editors will discuss their essays and their broader work in relation to archives and popular culture. 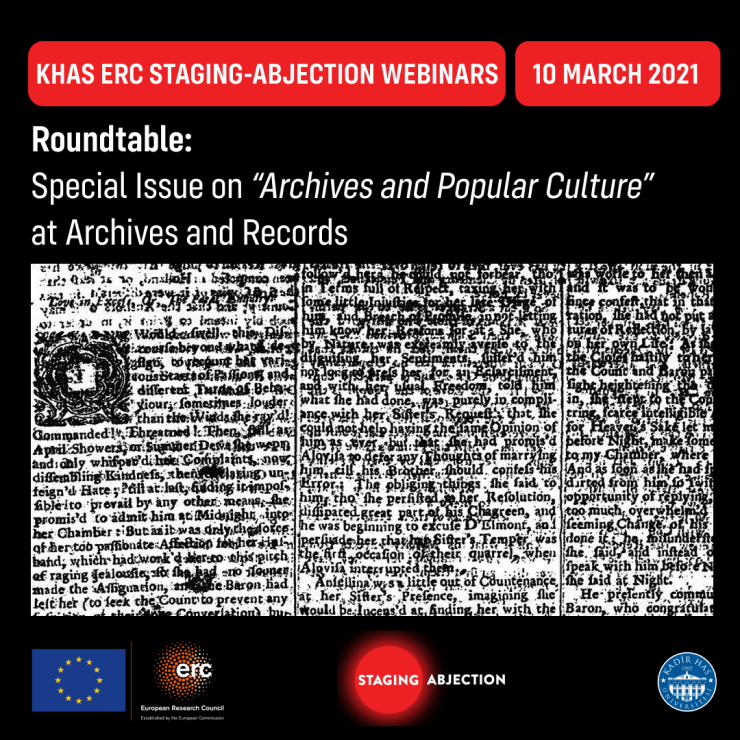 The latest issue of Archives and Records, guest edited by Rüstem Ertuğ Altınay and Olivera Jokić, explores how the changing notions of the popular affect how we imagine and build archives, and the opportunities and challenges popular culture materials present for archivists, institutions, and researchers. The four essays by practitioners and scholars study the strategies and practices of archiving popular culture in the early twenty-first century and suggest some ways in which archival work can shape popular culture. The authors take up theoretical concerns in light of the practical questions about the creation and interpretation of the archives of popular culture, from the ephemerality of records and storage protocols to the material and symbolic value of collections and their significance in the development of new philosophies and practices of teaching with the archive. At the roundtable, the authors and the editors will discuss their essays and their broader work in relation to archives and popular culture.